How India’s ‘Menstrual Man’ redefined that time of the month

It’s not breaking news but it simply BEGS a closer look. Find out how one man’s ingenious idea brought Indian women from ash and sand to the ‘next level’ of female hygiene.

In the Western world we don’t need to, but ash is one of the prime choices for many women in developing countries due to its sterilizing properties. Or at least… it was, until sunny faced, school drop-out Arunachalam Muruganantham – a.k.a. Menstrual Man – entered the scene.

The man in this photo is Arunchalum, the machine next to him he uses to reinvent sanitary pads

Newly wed Arunchalam discovered the dark secrets of female hygiene when he found his wife hiding some old and dirty rags that she used for her ‘time of the month’.

She explained that due to the stigma around menstruation, she avoided using public wash houses to clean sanitary towels and couldn’t hang them out to dry in the sun. Keen to impress his new wife, Arunchalam headed to the store to fetch a sanitary pad, only to find that they cost 40 times the amount of cotton – the primary component of ‘napkins’.

And then he had a Eureka moment. Why not create a cheap, easy to make sanitary pad that could improve health and hygiene and but also give women the freedom to get more out of their lives.

After months of research, unravelling the secret ingredients of the sanitary pad, our hero finally developed a processing mechanism that was simple, cheap and easy to use.

But all at a price. Due to his desperate attempts at securing candidates to test the product, his wife had left him on the accusation of infidelity. His own mother even moved out when she found him using a football bladder filled with blood to test the sanitary pad on his own skin. (Get the details on why he experimented this way in his TedTalk).

Undterred, Arunchalam persisted. Today, his machine has been installed in 1,300 villages in 23 states and is also being used in 6 other countries. Most recently, requests have been made for the machine in Syria, where it is used in refugee camps to help the female community.

And even his wife returned. Together, they are tackling what Arunchalam defines as ‘the three As’ that stand in the way of good female hygiene – affordability, availability and awareness.

By educating women about the importance of hygiene, teaching them how to use the pads and offering them the tools to make some at an affordable price, Mr and Ms Muruganantham are changing the face of rural India. 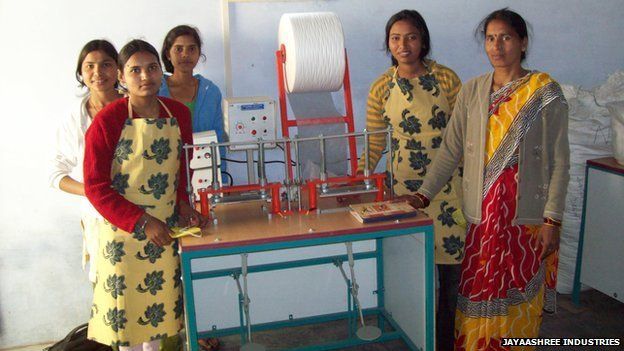 But if you thought this was enough to make the man a saint, think again.

Arunchalam could be rockin’ around New Deli in a Porsche, but his philosophy has been to stay away from money.

He has not patented the technology. On the contrary actually, he’s made it available online for free. So although he’s been named one of Forbes 100 most influential people of 2014, he’s certainly not as wealthy as the rest.

This is part three of five in our series “From catchphrase to action” where we profile people and organisations moving beyond talk to find concrete solutions to global health issues.